The number of homes flipped in 2015 was the highest in nearly 10 years, according to a report from RealtyTrac. The report showed that 179,778 single-family homes and condos were flipped — the highest since 2007.
According to RealtyTrac’s fourth-quarter 2015 U.S. Home Flipping Report, flips made up 5.5% of all single-family home and condo sales, up from a 5.3% share in 2014. This is the first annual increase in share of homes flipped following four years of shrinking.

“As confidence in the housing recovery spreads, more real estate investors and would-be real estate investors are hopping on the home-flipping bandwagon,” said Daren Blomquist, senior vice president at RealtyTrac.
“Not only is the share of home flips on the rise again, but we also see the flipping trend trickling down to smaller investors who are completing fewer flips per year. The total number of investors who completed at least one flip in 2015 was at the highest level since 2007, and the number of flips per investor was at the lowest level since 2008,” added Blomquist.
A flip is defined as a home that is bought and sold again within the same 12 months. In 2015, the 5.5% share of U.S. homes flipped in 2015 was still well below the peak of 8.2% of U.S. homes flipped in 2005.
See below for the five habits of highly profitable home flippers. Click to enlarge.

The share of homes flipped in 2015 was above 2005 levels in 12 of the 110 metro areas, including Pittsburgh, Memphis, Buffalo, New York, San Diego, Seattle, Birmingham, Alabama, and Cleveland.
“When home flipping numbers go up, it is usually an indication that the housing market is in trouble,” said Matthew Gardner, chief economist at Windermere Real Estate, covering the Seattle market, where the share of homes flipped in 2015 was down from 2014 despite being above 2005 levels.
“The problem with a rise in home flipping is that these sales artificially inflate home prices, making housing even less affordable for buyers and increasing the risk of a bubble. I’m happy to see that the percentage of home flipping sales in Seattle does not exceed the national average and that they’re down from a year ago. This makes sense given our affordability constraints and lower potential for profits for home flippers,” added Gardner.
Metro areas with the biggest year-over-year increase in share of flips were Lakeland, Florida, New Haven, Connecticut, Jacksonville, Florida, Homosassa Springs, Florida, and Akron, Ohio.
“We continue to see distressed properties funnel through the pipeline in South Florida, which makes it ripe for investors to profit in a strong selling market,” said Mike Pappas, CEO and president at the Keyes Company, covering the South Florida market.
“There are always sellers that will discount for a quick cash sale and open the door for astute investors to make a good return by repositioning the property,” Pappas said.
The Miami metro area had the most homes flipped of any market nationwide in 2015, with 10,658, representing 8.6% of all Miami-area home sales for the year and up 4% as a share of all sales from 2014.
Among 110 metro areas with at least 250 flips in 2015, those with the highest average gross flipping profit in dollars in were San Francisco, San Jose, California, New York, Los Angeles, and Oxnard-Thousand Oaks-Ventura, California.
States with the highest share of home flips in 2015 were Nevada, Florida, Alabama, Arizona and Tennessee.
Among states with at least 1,000 single family homes flipped in 2015, those with the biggest year-over-year increase in share of flips were Connecticut, Oregon, Maryland, Illinois, and New Jersey.
See below for the rest of the 2015 hot and cold home flipping markets. Click to enlarge. 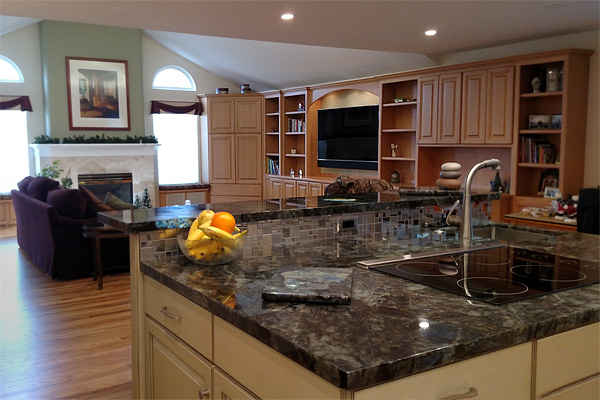 You love browsing remodeling ideas on Pinterest, but you also live in the real world. So how do you figure out what project will ultimately be worth the cost and effort? It’s not a whole lot different than choosing a life partner — will you still love them once the passion’s worn off? Will you still love your remodel after you’ve had to clean and maintain it year after year?

These three homeowners are still in love with projects they finished years ago. We give you permission to steal their strategies.
1.  Expanding Living Space — Outside

Florida’s called the Sunshine State for a reason, but what’s the point of all that vitamin D without a proper spot to enjoy it? When Jane Watkins purchased her Miami home 13 years ago, it offered a pool and plenty of yardage — but little outdoor living space.

Watkins is no stranger to DIY projects, so she decided to build an outdoor space herself. Armed with hammers, nails, and a few good friends, she framed and built a simple, low-to-the-ground deck.

The spacious outdoor room bridged the gap between the wild outdoors of her tropical backyard and livable space with cutouts for existing trees, providing enough square footage for a full set of patio furniture — and lots of play space for the kids. 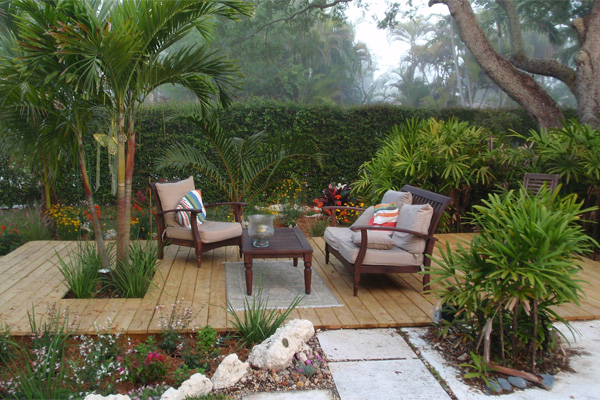 With the decking installed, stained, and sealed, Watkins’ family became masters of outdoor entertainment. They release ladybugs, paint artwork, and, of course, host parties, including an outdoor Thanksgiving dinner, a Kentucky Derby party, and an epic birthday celebration, complete with a cardboard castle. 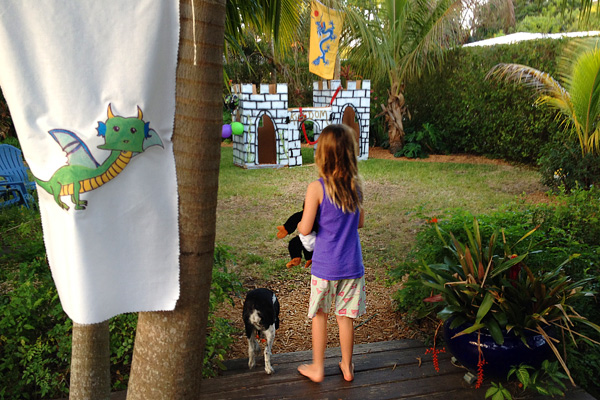 And it’s not just good for grand gestures and major events. It’s the “preferred sitting spot” for supervising swimming kids, Watkins says. “I sip my coffee out there, check out the yard, and hang.”

Lasting Love Lesson #1: Take on a project that physically expands the livable area of your home, even if it doesn’t require walls or a ceiling.

Related: 7 Ideas to Use Your Outdoor Space More
2.  Creating a Family Fun Hub

Georgia Harris and her husband Tim purchased their Los Gatos, Calif., home for its view of the Santa Clara Valley — definitely not for its design. “It looked like a brown, tiny little house, like the ‘Little House on the Prairie.’ It was very basic,” says Harris.

The unassuming home became a blank canvas for the family’s dreams. Their biggest renovation success: turning the downstairs into an all-in-one entertainment center to complement their brand new pool. 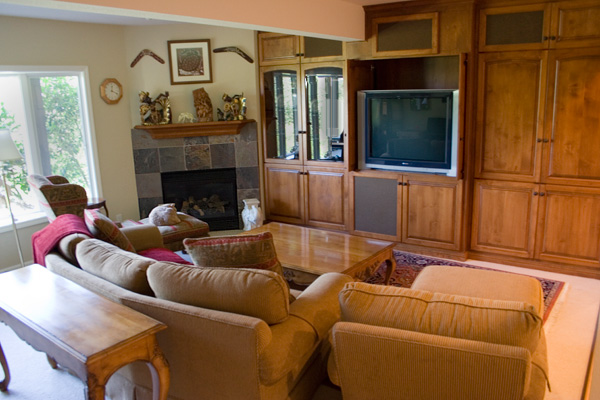 The previous owner had abandoned a basement remodeling project, leaving the lower level in dire straits.

Adding an enormous bonus room downstairs provided room for games and hanging out — a much-needed addition with two growing kids — and a 400-bottle wine cellar provides plenty of entertainment for the adults. The renovated basement helps the family stay in shape, too. An exercise room and direct pool access mean a well-rounded workout is only a flight of stairs away. 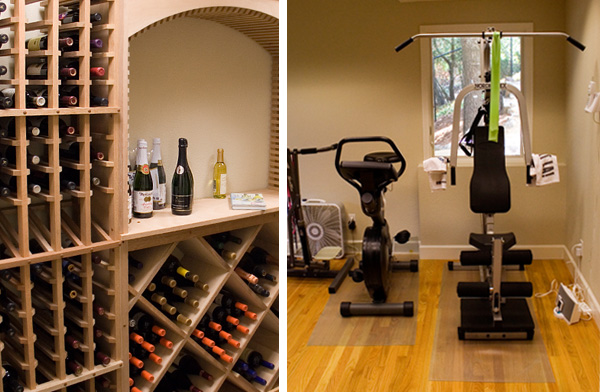 They even added an arched hallway to highlight that amazing view. “You can look from one end to another and see out the back,” Harris says. “We made everything really open.”

With one big project 11 years ago, the new Harris home went from an OK house with a great view to a house that’s as fun as it is functional.

“It’s the first time I’ve ever gone through a renovation like this,” Harris says. “I’ve done small projects, like bathrooms, but because we were involved in picking out everything, it feels like we built our dream home.”

Lasting Love Lesson #2: Give underused space a function that addresses the needs of everyone in the family.

When both halves of a couple come from enormous families, finding room for everyone at Thanksgiving can be quite the challenge. For Cindy Carey, she met the challenge with a remodel that combined her kitchen, dining, and living room into one ginormous great room — long before the Property Brothers made open floor plans de rigueur.

And more than 20 years later, she’s still in love.

“I love the big open room,” she says. “Everyone loves it. We’re able to entertain a lot of people.”

Carey often plays host for the holidays, and keeping the dining room as-is would have meant stuffing 26 people into one small room — or assigning everyone to different tables in separate rooms. Now, they’ve got elbow room to spare.

“Everyone may not be seated in a straight row, but we can all sit down and eat dinner,” Carey says.

A consummate entertainer, Carey regularly hosts employee holiday parties for her construction company. For this year’s party, she fit about 40 guests and a strolling magician into the room, no squishing required.

Carey says visitors are often astounded by the room’s size, considering its location — a tract home in the Bay Area.

“People don’t know how big it is until we get inside,” Carey says. “We get a lot of people that never knew this room could be back here.”